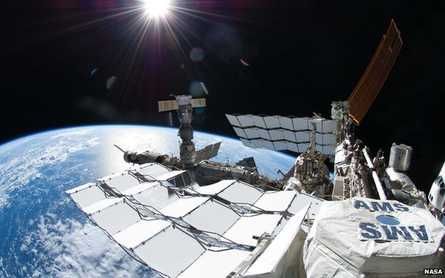 As shown in the figure, the experimental instrument installed on the space station is worth 2 billion US dollars. 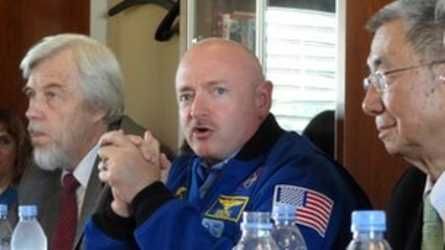 Mark Kelly (middle) said that the alpha magnetic spectrometer is the most important experimental equipment on the space station. 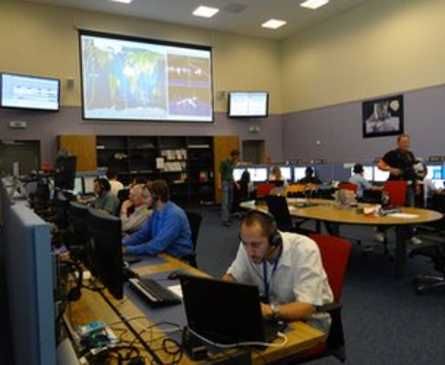 The European Nuclear Research Council in Geneva remotely controls the operation of the Alpha Magnetic Spectrometer in the control center.

According to reports, the largest space experimental instrument in history has recorded 18 billion cosmic ray events, helping scientists to open the mystery of the universe.

This data is much more than the number of cosmic ray events recorded by humans in a century.

This Alpha magnetic spectrometer is operated by the European Nuclear Research Council and aims to explore dark matter and antimatter.

The astronauts installed the Alpha magnetic spectrometer on the space station in 2011, and now the astronauts are observing at the control center in Geneva to understand its operation.

Among the cosmic rays captured in the experiment, there are several rays that are the most powerful high-energy particle rays recorded by humans.

Kelly's mission, code-named STS134, was the last mission of the space shuttle Endeavour. After this mission, Endeavour retired from NASA's fleet.

On Wednesday, the crew members of Endeavour came to visit the load and operation control center of the European Nuclear Research Council. At this center, six scientists are responsible for monitoring the operation of the Alpha Magnetic Spectrometer 24 hours a day.

Acting spokesman Roberto Battiston told reporters of the BBC that they were very happy to see astronauts with Alpha magnetic spectrometers coming to visit the center.

"We are grateful to these astronauts because they risked their lives to install this instrument, and for us, experimenting with this instrument is purely because of our interest and curiosity."

"We have great expectations for the Alpha magnetic spectrometer, and we hope to use it to discover new things, because the astronauts have spent a lot of effort on this, we are a family."

This $ 2 billion Alpha Magnetic Spectrometer weighing 7 tons is a huge machine with a specially designed magnetic block in the center of the machine. The magnetic block can distort the trajectory of high-energy charged particles-cosmic rays, direct the rays to a series of sensors, and the sensors analyze the origin of these particles.

On the ground, people built large particle accelerators and let the particles collide with each other to simulate the process of their generation in the universe.

From the perspective of scientific research, the stakes are large. Alpha magnetic spectrometer can find the result of the collision of mysterious dark matter, and dark matter occupies a lot of space in the huge universe. Alpha magnetic spectrometers can capture something called "singular quarks" and can even explain why the universe we see and why most of it consists of matter rather than antimatter.

"It is necessary to carry out more than 35 flight missions-very complicated round-trip flights to space-in order to build the incredible International Space Station." Captain Kelly said.

During the fourteen months of operation, the Alpha Magnetic Spectrometer recorded 18 billion cosmic ray events, which is more than humans have recorded in the past century.

But the Alpha Magnetic Spectrometer is a unique instrument. It takes a long time for people to understand what it sees in a few hundredths of a second-and so far, the scientific team has only analyzed a small part of these data. .

Seventeen years ago, Professor Ding Zhaozhong, a Nobel laureate from the Massachusetts Institute of Technology, initiated the Alpha Magnetic Spectrometer project. Later, he encountered many setbacks and faced budgetary problems. It was the bill that allowed the project to continue, and the spacecraft began to deliver materials to space from time to time.

The scientific team has noticed an ultra-high-energy positron, an equivalent amount of antimatter-9 trillion electron-volt nuclei-which is higher than the energy of particles that the Large Hadron Collider can produce.

But Professor Ding Zhaozhong acted cautiously and carried out his work systematically, and was not in a hurry to announce any findings.

"I told my colleagues that in the next 40 to 50 years, no one will be stupid enough to repeat my experiment. It is too difficult." Professor Ding Zhaozhong told a BBC reporter.

"Therefore, the report we publish will be extremely important, and we can't make a difference. Otherwise, we will mislead the physics of the future, and people have no way to verify our right or wrong." 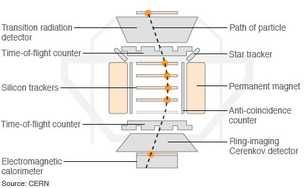 Transition Radiation Detector can detect the speed of high-energy particles.

Silicon Trackers can track the movement of particles. The degree of curvature of the trajectory depends on the charge of the particles.

Permanent Magnet (permanent magnet) is the core component of Alpha magnetic spectrometer, it can make the particle trajectory bend.

Time-of-flight Counters can calculate the speed of low-energy particles.

Star Trackers can scan the star field to determine the orientation of the alpha magnetic spectrometer in space.

Greg Chamitoff, an expert on the STS-134 mission, told the BBC reporter that he was very happy to work with the Alpha Magnetic Spectrometer team.

"If they discovered antimatterâ€”even if it was only one--that would be a great discovery, because they would also know where the antimatter came from, and they might say that the galaxy on that side is an antimatter galaxy."

"The results we analyzed from the discovery of the alpha magnetic spectrometer will be transformed into our understanding of the universe, and we will understand what exists in the universe."

The astronauts were accompanied by wives, including the wife of Commander Mark Kelly of the STS-134 mission, Arizona Congressman Gabrielle Giffords. This visit to the European Nuclear Research Council was her first foreign trip after recovering from the shooting injury. A few months before her husband's flight mission, she was shot in her hometown.

Sergio Bertolucci, the research director of the European Nuclear Research Council, welcomed the visitors, saying in his speech: "We will not find the answers we need in one place."

"Alpha magnetic spectrometers can indeed solve some problems like the Large Hadron Collider. I think this is very good. We can't be too specific in this field, because for the answers we are looking for ... more different Invest. "He told the BBC reporter.

"After all, we are trying to explain: why the universe is like this."

Professor Ding Zhaozhong insisted on refusing to disclose what he expected to discover, and the scientific team was conducting intense analysis on the large amount of data on hand.

He believes that we may not be able to perceive future discoveries.

"You can look back at particle physics in the second half of the last century."

"In the 1960s, scientists established large accelerators at the European Nuclear Research Council and Brookhaven in the United States to study nuclear. At the European Nuclear Research Council, they discovered neutral flow; in the Brookhaven, United States, they discovered Two kinds of neutrinos, charge parity non-conservation and J particles. These three discoveries all won the Nobel Prize. At the Fermi Accelerator Laboratory, scientists â€™original intention was to study neutrino physics, and they discovered the fifth And the sixth quark. "

"When people build a new instrument, you will ask the best scientists and what they will find. But what scientists discover through these sophisticated instruments often has nothing to do with their original intentions.